Here is your due warning, I'm leaving LJ for blogger at the end of the month. http://chrislangs.blogspot.com/ will be active and all new long-form navel gazing will be gradually migrated. Any tips on archiving and exporting the last 10 years of LJ?

This weekend I ran off to Portland to attend Filmed by Bike, which is, unsurprisingly, a film festival about for and on bicycles. The festival is really only an excuse to visit one of my favorite cities in America, and this was my third or fourth year attending, I forget. 30 of my friends also came down in cars and trains and we made a hell of a mess of ourselves. True fact about Portland Oregon; all the strippers have a butterfly tattoo on their person. It is seemingly of their choice which exact big to get inked and where it goes, but I've been watching them, and every stripper has one. Its like its a law or something. I'm not a huge consumer of the stripper-market but Portland has a terrible economy and lax social morals. Hence they lead the nation in strip clubs per capita. Inevitably, the plan of going out to a strip club comes up and it doesn't seem to carry the same social stigma as it does here. Or, we're just all insensitive cretins and our eternally patient hosts just grin and give directions.

I returned on the noon train today with about 10 hours sleep in the last 48 in the tank. To keep my circadian rhythm, I stayed busy by walking over to my p-patch to put in some community-service hours weeding in the sun. It was fun and I had a little nap in the shade once I was done. On the way back with milk and eggs in the backpack, I saw a person gardening on his porch. This house has caught my eye from the day I moved in, a classic bungalow with an old-school mature Elizabethan garden. I respect the amount of time that goes into maintaining a classical flower garden, so I called out to the guy; "Hey I like your garden!" Thinking I would just have a brief howdy-neighbor conversation and move along.

Curtis called me over for a proper hello and to make a new friend. He's been there since 1947, and looks it. He was a runner until only the last few years, so he doesn't look like he is in his 70s, just old grey and gaunt. He then dropped an over-share bomb; he is on his second week of chemotherapy to fight pancreatic cancer. His wife died years ago. He lives on a small pension and Social Security, and now the house is in foreclosure. If he's lucky, he won't live long enough to have to lose the house. He recognized that I was aware of the solemnity of his situation, and said he was doing ok, just weak and tired a lot.

I felt great empathy for the man, shared that cancer had touched my life gave him the only advise I knew; Be strong. Stay strong by doing what makes you happy. Just stay strong and enjoy what you have, even if it is very little.

I told him to keep gardening, and that if he needed help in the yard when harder times came, so that when he needed it his happy place would be there, beautiful and waiting for him, to call me and I would help. Its what any gardener would do, and would hope someone else would do for them.

A life, a study in balance.

spring babies
Originally uploaded by langston
Most of these are ready for the garden. The tomatoes and peppers are going to stay inside until Mother's Day or so. We'll see come 6 months or so whats still alive. 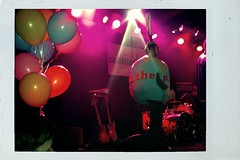 Wrecked tire
Originally uploaded by langston
another winter, another killed tire. It hit 60 today, and I took the long way home since it was nice out. Actually, forget the long way, I went the "10 miles out of your way" route because I had a headache and sore legs and a good middling ride would clear up both.

For the sake of full disclosure, I came home and took some acetaminophen for the headache and the legs are at that point where they'll be pretty sore for the next few months, bike willing. I do need a new tire though, it is waiting for me at the bike shop.

I won't lie and say sitting in my living room working on a bike, listening to music I like at a comfortable volume and as much beer as I want to wake up and go to work in the monring after isn't fun, but it would be more fun not by myself . This Sarah girl, she's awful sweet and I'm just now starting to learn her quirks beneath where she hides it. Its not just that we happen to enjoy many of the same things, which aren't that unique or unlikely, its that this girl doesn't know the word No. heh no not like that but I've yet to daydream about a ridiculous adventure she's not at least willing to come set up base camp and wait for me, or pick me up when I bonk. It could slipslide into some storybook adventure-nerd love story pretty easily I think, but dammit if  I'm not at a place where I want to maintain my own space. Bah.  too much navel gazing. Gotta remember;  just ride the wave, brah. thats it ride the wave. or my bike. let it roll. 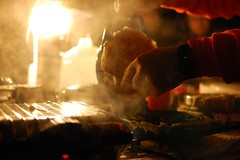 Joby Serves
Originally uploaded by joeball
waffle ride V5.0 was a great success. I birthed a poop-raptor today, my guts are not amused

just realized the package deal I signed up for has an 11hr layover in San Diego. Godfuckingdamnit.

Two things. I wrote a big long post on this article; http://deadspin.com/5453889/on-the-gentle-path-too-a-dispatch-from-the-front-lines-of-sex-addiction

but locked down because it was too much to have on the internet.


I'm going to Cabo San Lucas for 5 days next week. Beside Vancouver BC and Tijuana I've never left the country before. I travel extensively domestically, and for many years did not have a passport.I was also poor and even now abhor credit, so international travel has always been a "sure, that'd be fun. Just like learning to fly or shoot fire out of my penis". I'm going to make sure Mexico puts a stamp in there, just to break the seal.
Collapse